Declinations are the movements of the planets north and south of the celestial equator as pictured in this image. Mars and Jupiter are in parallel aspect.

Parallels and contra-parallels are major aspects. They just as important as conjunctions and oppositions, and function very similarly. In fact, some charts make little sense when viewed against the backdrop of the person’s life — until you look at the declinations. Some charts are absolutely loaded with P and CP aspects (example: USA – Pluto CP Sun, Venus, Mars, Jupiter).

The Sky Is Not Flat Like An Astrological Chart

All planets move not only along the east-west longitude axis (zodiac position), but also north and south of the celestial equator over time. Look at how much the Moon’s path can vary further north and south from the Sun’s (ecliptic). The Moon moves rapidly through its declination cycle, going from its extreme south to extreme north phases 13 times a year. 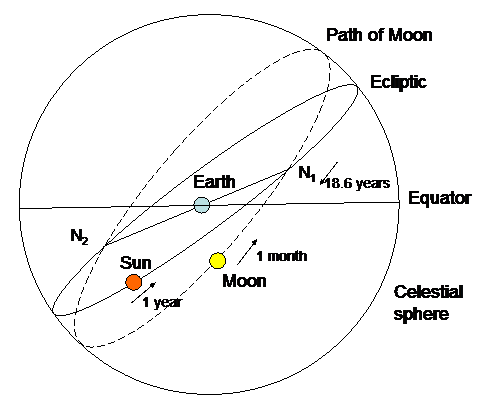 Astrology practice has unfortunately been stuck in a charting system that acts as if the solar system and universe are flat. The flat wheel chart depicts the planets’ longitude positions only, leaving off their north and south positions, the declinations. That’s half the aspect picture. For me this is unacceptable. The added information of declinations changes the picture, changes the perception and interpretation of nearly every birth chart.

A Better moving picture of the planets

This more direct angle of the Sun upon areas north and south of the equator is what creates the seasons — not its east-west movement along the ecliptic (zodiac). In June and July the Sun’s position peaks in northern declination, creating summer in that hemisphere, and winter in the southern hemisphere. The reverse is true come December and January. When the Sun crosses 0° declination we have the equinoxes, which mark spring and autumn depending on what hemisphere you are in.

This is declination. Sun and planets’ paths move in a wave form north and south of the equatorial midline. When they near this area of 23° north or south they are considered in extreme declination (where their movement north/south slows down).

Pluto’s Declination off the ecliptic

Irregularities come in when Pluto is involved. Its orbit is out of phase with the other planets’ general course in relation to the celestial equator (north and south). This means that often it will make Parallel or Contra-parallel aspects that are unexpected from its zodiac position (longitude).

This is an example of why the astrologer should check every planet’s declination rather than make the assumption of false zodiacal equivalencies as is done in traditional astrology with the concept of antiscia, a concept that while technically correct for the Sun’s position, has no usefulness for Moon, and especially outer planets.

When Pluto arrives at 0° Aries it is at about 15.5° South declination. It doesn’t hit the celestial equator +/- 0° until it is in early-mid-Taurus (about 10-13° Taurus). When Pluto passed into Libra in October 1971 it was at 15.5° North declination. It didn’t hit the celestial equator again until it was in early-mid-Scorpio (10-13° Scorpio). So you can see how Pluto lags about 1-1/2 signs behind other planets it in declination position.

Have you ever wondered why people of supposedly incompatible signs married and stayed together? The answer is partly found in the Parallel and Contra-parallel aspects of declination.

When planets are in signs of Northern declination (Aries through Virgo), there are possible parallel aspects created between planets in different signs, unlike conjunctions in longitude. The reverse is the same for Southern declination.

Declination along the ecliptic through the tropical sign changes

Planets in Aries can be parallel those in Virgo. If you’ve ever wondered why a Virgo and an Aries seem to get along together, get married and have children and stay together so compatibly, understand that their synastry may include parallel aspects between their charts that form bonds just as strongly as conjunctions do in longitude (flat wheel chart).

Taurus and Leo share about 12° to 20° North declination. Same story here. Yes, people whose charts show synastry squares can have points of great compatibility too.

This means declinations Often Create A Better Synastry Picture.
One person’s Sun-Venus conjunction in Taurus can be Parallel the others’ Sun/personal planets in Leo. This can allow for compatibility that conventional astrology says isn’t there. Parallels create fusion, unity in this fashion.

Very often when the flat wheel chart shows a lack of close aspects between mother and child’s charts (or lovers), there is often at least one significant Parallel or Contra-parallel in the declinations of their charts.

Declinations are so important for the whole astrological picture that I often look to them first.

Jim Carrey’s birth chart not only has Mercury and Jupiter square the Ascendant, but because all three are right in the middle of fixed signs, they are in aspect in declination. Mercury & Jupiter are also parallel his Asc. This is a double shot of mental energy, jovial thinking, and antics.

These ilustrate very well the comedian’s verbal acuity, jovial nature, and his actor’s recall and big personality. These, added to the obvious Neptune conjunction to his Asc, show his birth potential for being a great actor. Carrey, not surprisingly, is also a big thinker, and has powered his career through optimism and a metaphysical creator’s approach to creating his life.

Another similar example, but with Pluto in the mix, is Robin Williams. Fellow comedians like Louie Anderson considered him the world’s greatest stand-up comedian. Here is Robin Williams’ data sheet showing declinations of Mercury parallel Asc and MC. Both Mercury and Pluto are conjunct the MC. In addition, note the parallels of Mars, Uranus, Pluto. Powerful bursts of energy.

Mercury is verbal agility, Mars-Uranus-Pluto is the potential of creative intensity that takes on a life of its own once it gets going.

New York real estate developer and socialite, Donald Trump has some pretty extreme declinations. Just take a look at this summary I slapped on top of the common chart for him.

Out of Bounds Planets

Out of bounds (OOB) is when a planet passes outside the ecliptic, either northward or southward. I agree with Alice Portman’s assessment that out of bounds planets relate to the ability to function outside the box of conventional or expected behavior. This means a person who can go it alone is certain ways or take that planets’ energies a bit further than others. However, this concept of OOB has already been over-emphasized by students and astrologers new to declinations. That is because it is easy to identify and lends itself to simplistic (or over-dramatized) interpretation.

I don’t make too much of a planet being merely out of bounds. I look for aspects to the planet, and for how it may create a necessary emphasis in the chart overall. Being urged to function outside patterns of societal familiarity is very important for social progress, creative endeavors, and original thought of all kinds. These out of bounds placements can be gifts to be positively employed for your benefit and others’.

Because precession is a backward movement of the earth’s axial alignment (wobble), it is implied in this declination cycle that as the earth moves from alignment with 0° Libra / 30° Virgo — or 0° declination moving slowly northward — that this could be a “zero point” for earth cycles of development.

Virgo implies impregnation and birth and the material supremacy of the iconic feminine (goddess) in this cycle with Libra implying a just, final balance between all opposites — integration.

The mistake of omitting declinations was — and still is — very widespread.

K.T. Boehrer actually led the way in revitalizing the use of declinations in modern astrology. She authored Declinations, the hidden dimension. John Willner, author of The Powerful Declinations, did as well, but was less known. Some traditional Arabian astrologers used declination, but this was mostly lost when their ideas were borrowed by the Greeks (often incompletely learned) and transmitted westward.

In recent times the Magi Society has begun charting declinations superimposed upon the zodiacal chart along an S-curve (sine wave).

Some programs like SolarFire give a special sidebar aspectarian for declinations. Astrodienst will create a pdf document of planetary and house positions including declinations. (You have to find the declination aspects – parallels and contra-parallels – yourself). Even freeware Astrolog allows you to view declinations separately from zodiac position by going to the ‘Edit’ menu > ‘Enter command line’, and entering /sr. (Note the zodiac positions will be temporarily altered from correct until you again enter the command to reverse it.)